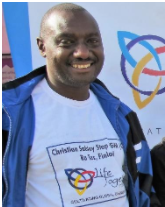 Delmark is a devoted husband and father who lives in Kapchorwa, Uganda with his wife, Janet, and their six children—four girls and two boys. His official career is in the local government of Sebei District as the Senior Assistant Town Clerk, Central Division. He is also, however, a tribal leader among his people—the Sabiny, a tribe of approximately 230,000 people who have practiced Female Genital Mutilation throughout their history. His Christian faith fuels his desire to carry out each of these roles as a reflection of his love for Jesus.

In November of 2010, Delmark’s passion to see his tribe abandon the practice of Female Genital Mutilation led him to facilitate a partnership between the Anglican Church in Sebei Dioceses and Life Together International. We have ministered faithfully side-by- side ever since.

As Life Together’s Director of African Operations, Delmark arranges and oversees every facet of LTI’s work on the ground in Uganda. He has also traveled with LTI to Johannesburg, South Africa to help facilitate ministry there. He and Patti Ricotta co-wrote a grant awarded by the Finnish government’s Department of Civil Society and sponsored by the Finnish NGO, RaTas (Christians for Equality).

With wisdom and integrity, Delmark has coordinated between the Finnish government, Sebei Dioceses, and Life Together as director of the grant. These resources allowed Delmark to create a Ugandan sister organization, Christian Sabiny Stop FGM (CSSF), the purpose of which is to eradicate FGM by raising the status of girls and women in his tribe. Through CSSF, Delmark and his team of female leaders provide Christian discipleship mentoring and income-producing skills training to 250 vulnerable girls from deep in forgotten villages scattered across more than 1,100 miles of remote mountainous terrain.

The lives of our 250 CSSF girls, as well as the lives of hundreds of thousands of his fellow Sabiny, are being changed for the better due to Delmark’s tireless work on their behalf. Life Together International is enormously grateful to Delmark for his deep commitment to God, to his people—especially the women and girls—to his country, and to us.